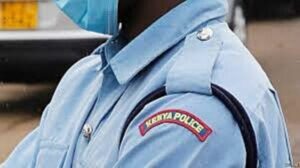 The Directorate of Criminal Investigations (DCI) Kenya has launched manhunt for a police officer who allegedly killed a man he found in bed with his wife.

DCI in a statement on Friday, August 26, 2022, said the suspect arrived home unannounced in the middle of the night and found the deceased identified as Henry Cheruiyot, “reaping where he hadn’t sown.”

“Detectives are looking for a police officer based at Lokichogio in Turkana county, for the murder of a man whom he found in a compromising situation with his wife, in the dead of the night.”

“The General Service Unit officer had proceeded home on leave in Tinderet, Nandi County, where he is believed to have found the deceased Henry Cheruiyot, 29, reaping where he hadn’t sown, on the night of August 22, 2022

“An altercation then ensued and the paramilitary commando is believed to have descended on the man with an avalanche of heavy blows and kicks, before leaving him for dead and taking flight

“Cheruiyot, was found lying unconscious beside a road at Nduroto village in Tinderet by well wishers, who rushed him to Meteitei sub-county hospital. However, his condition deteriorated and he was transferred to Nandi county hospital where he succumbed to his injuries as doctors unsuccessfully tried to save his life

“A search conducted in the officer’s house by detectives led to the discovery of the deceased’s blue T-shirt, a hood and blood stained inner-wear that had been stashed in a sack

“The deceased’s body is lying at the Nandi County referral hospital, pending an autopsy as a manhunt for the suspect ensues.”